An Irishwoman who became a mother through sperm donation in the early days of the pandemic has said she would make the same decision “100 times more.” 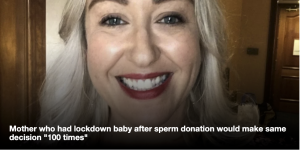 Mary Butler was coming towards her 40s when she decided that, if she wanted to become a mother, she may have to go it alone.

Her doctor put her in contact with the Waterstones Clinic in County Cork and, after getting the green light to go ahead, she gave birth to her daughter Irish in May of last year.

On Newstalk Breakfast this morning, she said almost given up on the idea of motherhood before deciding to investigate sperm donation.

“I had kind of pushed it away a little bit in terms of, I didn’t really want to dream that I could have a baby on my own,” she said.

“It wasn’t even something that was really on my radar. I suppose I thought it was for celebrities or the really rich people who had nannies – I didn’t think it was for someone like me.”

She said she spoke to a lot of her friends and family about the idea before taking the plunge.

“I said look, I am thinking about doing this, do you think I would be able to do it? As in physically look after a child on my own,” she said.

“I have to say everyone was so, so supportive. A lot of my friends who have children said, well it’s hard but it is hard for everyone initially and they said you absolutely are able for it.”

She said she was prepared for people to question the decision but “no one ever did.”

“I think my family were definitely worried for me in the sense of, it is a lot to take on, on your own,” she said. “But they were so, so supportive and it is something that I am always so grateful for that I had that support.

“My mother came with me to all of my appointments. When all of the tests were done, when I actually had the procedure, she was there holding my hand. I have always felt that incredible support.”

Ms Butler said she wants Iris to know her story as soon as she is old enough to understand.

“It is never something I am going to hide from her,” she said. “I am so proud of how we have become a family.

“You have one mum, two mums, one dad, two dads or you know, parents who don’t live together – there are so many different types of families and I suppose, what I want her to know is that that is the norm.

“One of the reasons I am so excited to talk to you today is that I want people to be aware of the different types of families so it becomes the norm.”

She said it has been hard being a new parent during lockdown – but she has no regrets about her decision.

“It is so hard to know what to expect until you are in the middle of it,” she said.

“It has been hard at times. It is hard being a single parent at times – being a solo parent and being a new parent in the middle of a pandemic but she is just amazing.

“She is just incredible and I have no regrets. I would do it 100 times more.

“I would do it 100 times to get Iris but I am happy with me and Iris as our family and I am going to stick with just the one for our family.”

Back to news Print this page

Similar in this category

Do you know what a healthy period looks like and when you’re ovulating?